All Pretty in Pinks! Catskills Dianthus! 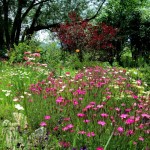 Starting to bloom right now in Catskills gardens are the flowers known commonly as Pinks, but also known by their scientific name Dianthus. They are part of a large group of flowers, annuals, biennials and perennials, in the family Caryophyllaceae, with many garden and wild representatives of interest to the Catskills gardener. But the family name is such a tongue twister, I will here call it the Dianthus family.

Dianthus family plants have flowers with 5 petals, which are notched or irregular on the outer edges, and stems with swollen joints where the leaves connect to the stem. There is usually a long tube beneath the petals. In this post I will first focus on the garden plants within the genus Dianthus, and in a future post I will describe some other Dianthus family plants closely related to the Dianthus described here. 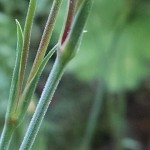 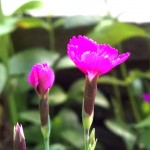 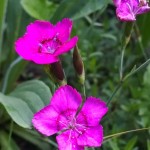 The best known flower in the Dianthus family, known even to non-gardeners is the heavily scented Florist’s Carnation. It has been so modified by plant breeders that the petals are doubled or tripled. The wavy edges of the petals make the Carnation flower more substantial than other types of Dianthus, but originally the flower was pretty similar to the other Dianthus flowers pictured here. In the Catskills, Carnations can be grown as an annual in the cutting garden or in planters, but the seeds need to be started early indoors.

Probably the most common Dianthus family flower in Catskills gardens is Sweet William, Dianthus barbatus, which usually flowers in its second year. Like the Carnation, it is strongly fragrant. 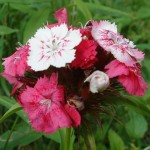 It freely self- sows and will persist in garden for many years if not accidentally weeded at the seedling stage. 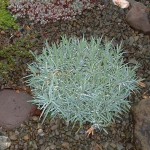 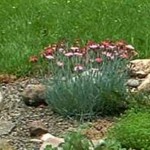 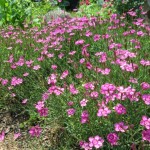 In a future post, I will discuss some other Dianthus family flowers including a wildflower and a weed!