All Champion Campions of the Catskills! Pretty in Pinks Part II!

Champion Campions of the Catskills! Pretty in Pinks Part II! 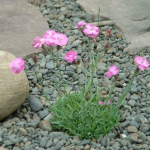 Cerastium, also known commonly as Snow-in Summer, is a Dianthus family plant, useful in the garden in sunny situations. The photo of its white flower clearly shows some of the Dianthus family characteristics: the 5-petaled flower, and the petals notched or split. 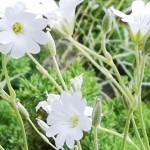 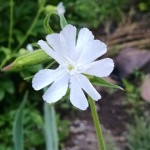 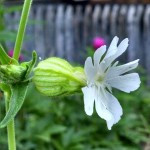 Last week, in a photo I showed the long tube beneath the petals, a characteristic of Dianthus family plants. In the following group of species in the Dianthus family, the genus Silene, the long tube is often greatly inflated. Blooming right now in the Catskills is a member of this group, a plant native to the Old World that has become naturalized throughout our area.

The White Campion, Silene latifolia, is also called the Bladder Campion because of the very conspicuous inflated flower tube pictured here. It is one of the larger members of the Dianthus family; the plant pictured here is almost 3 feet tall. 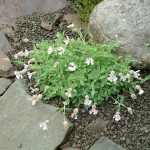 There are many gardenworthy Silenes. The little Silene pictured here is lovely in the rock garden.

Another group of Dianthus family plants closely related to the genus Silene is the genus Lychnis. The species Lychnis coronaria is a sturdy larger garden plant that often self-sows. The flower tube is a bit shorter, but still moderately inflated, and with ridges as well. 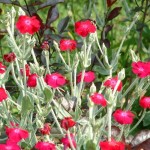 The hot pink flowers contrast well with the woolly bluish leaves. There is a white-flowered variety as well. 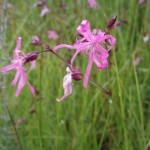 Another Lychnis has just finished blooming in our area, the Ragged Robin. Its petals are so split that it looks lacy, or fringed. Like the White Campion, it has become naturalized here after being introduced from the Old World. It often forms dense stands along roadside ditches, as it has a preference for wetter sites such as meadows.