All Mints of the Mountains! 3 Easy Ground Covers for Catskills Gardens!

Mints of the Mountains! 3 Easy Ground Covers for Catskills Gardens! 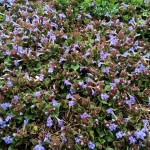 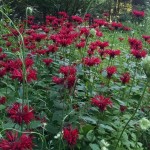 Mints are a huge family of plants with many representatives, both in the wild and and in the garden. Besides spearmint and peppermint, obviously mints, thyme and sage of the herb garden, and the beebalm (genus Monarda) one of the most popular flowers in Catskills gardens – all are members of the mint family.

As a family mints are easy to identify, based on the following characteristics:

Blooming right now in our gardens are 3 types of mints that are useful as ground covers because they are vigorous and low-growing. They form carpets of attractive foliage and are useful for filling in areas in the garden. 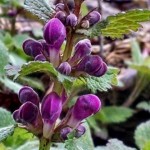 Lamium is useful in shady areas, usually grown for its variegated foliage, but its flowers show it to be a true mint. The Lamium pictured here has dark pink flowers and leaves with a central white stripe. Another type of Lamium blooms later with yellow flowers, and has white variegation on the leaves which looks like netting. 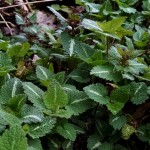 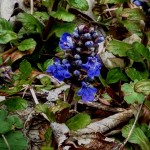 Ajuga, commonly known as Bugleweed, makes a beautiful carpet of deep blue flowers at this time of the year.  The photo shows the lopsided flower characteristic of mints.  There are many varieties of interest to the gardener. Most of the varieties have blue flowers as pictured here, but there are also several beautiful pinks available. The leaves come in various colors of variegation, including varieties with white, pink, or dark purple coloration. There are varieties with tiny leaves and larger leaves, and even a variety with shiny crinkled leaves. 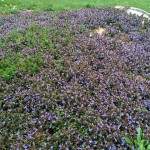 Glechoma hederacea, also known as Ground Ivy, is very common, and considered by many as a weed because it is so vigorous, but it is capable of prettiness when allowed to grow as a carpet. Originally from Europe, it was used to flavor beer in medieval times, until replaced by the more popular hops. Here in the Catskills, it has become so naturalized, that it is often thought of as a wild flower or a weed.