All Mints of the Mountains II – Monarda (aka Beebalm)

Mints of the Mountains II – Monarda (aka Beebalm) 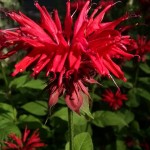 Beloved for its bright red flowers, the Bee Balm, known to botanists as Monarda didyma, has been blooming for several weeks in the Catskills region. This perennial species of Monarda is often found growing wild, and is also popular in the garden. It is a truly native wildflower and is the most common species of Monarda found in the Catskills area. 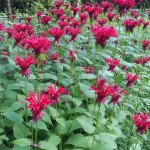 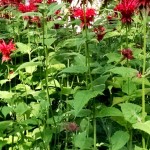 Compared to the mints I discussed in Mints of the Mountains, which are short and function in the garden as ground covers, Monarda is a much taller plant. But it retains the square stems and irregular flowers characteristic of other plants in the Mint family.  It also shares with other mints the characteristic of having aromatic leaves. It is called False Bergamot for the resemblance of its aroma to that of the true bergamot, a citrus fruit whose rind is used to flavor Earl Grey tea.

The flower head is an aggregate of many flowers. Each flower has a long tube; it is unscented, red and nectar rich and is designed specifically to be attractive to the Ruby-throated Hummingbird, which is its chief pollinator. 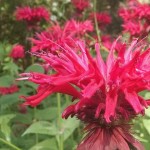 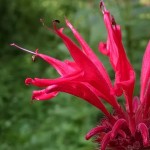