All Lupins: Legumes Of Catskills Gardens! 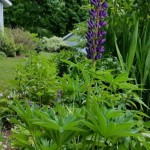 In gardens throughout the Catskills, the lupins are blooming. Their showy spikes of flowers stand up above the foliage, and create bright spots of color at this time of year.

There about 200 species of Lupin, found mostly in the Americas with a few other species clustered around the Mediterranean Sea. Most are plants very similar to our garden lupin, but a few species in South America grow to be shrubs or small trees.

The lupin group of species belongs to a very important family of plants, the legume family. The legume family, known to botanists as the Fabaceae, includes many plants important to us as food plants, such as beans and peas in all their variety, and important forage crops such as alfalfa and clover. Besides lupins, there are several other plants of interest to the Catskills gardener. 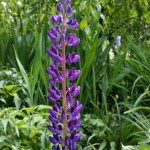 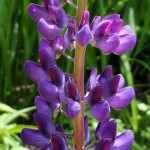 Though arranged in spikes, the individual lupin flowers, upon closer inspection, look very similar to pea flowers. They are bilaterally symmetrical, in other words the petals are arranged so that there is a distinct top, bottom and sides to the flower. A daisy, in contrast is radially symmetrical, the petals are arranged in a circle. All legume family plants have a structurally similar flower. Originally there were five petals but the two lower ones fused. Thus legume family flowers appear to have four petals. 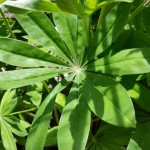 For the most part lupins have distinctive leaves. They are are hairy, smooth-edged, and divided into leaflets radiating from a central point. But one look at the seed pod confirms that the Lupin is indeed a member of the legume family. Lupin seed has been used for food by indigenous people of South America for millenia, but it requires special processing to remove poisonous alkaloid chemicals to render it edible. 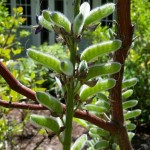