All Catskills Clovers! Legumes of the Catskills II 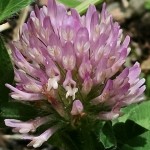 Previously, I discussed the Lupin, a popular garden flower, which is a member of the Legume family of plants. I also mentioned the important crops that this plant family provides for human consumption and animal feed. Legumes also have a very significant role in improving the quality of soil. An important chemical required for plant growth is the element nitrogen. It is a very common element, found both in the air and in the soil. But it is often in a form that plants can’t digest. Legumes solve this problem by housing colonies of bacteria in nodules on their roots. 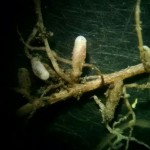 The photo shows the nodules on the roots of white clover. The bacteria convert the soil nitrogen from the form that the plant can’t use to the form that the plants can use. And since the bacteria convert more nitrogen than the legume actually needs, there is nitrogen leftover to enrich the soil, for other plants.  This is why farmers will often grow a soil enriching crop like clover or alfalfa, and alternate with a soil exhausting crop like corn, a technique called crop rotation.

Legumes are some of the commonest plants; many are considered weeds in gardens. Look closely at any sunny patch of ground or roadside and it is likely that you may find one of the plants described below. The first three are clovers. They have leaves divided into three leaflets, hence the name of the genus Trifolium (= three-leaf). 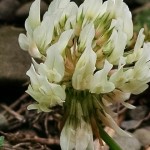 White Clover (Trifolium repens) is valued as a forage for cattle, but considered a weed in lawns. Its ground-hugging habit makes it very resistant to mowing. It is probably the most common of the legumes discussed herein. 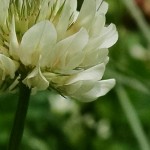 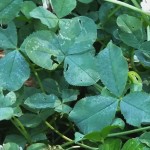 Red Clover (Trifolium pratense) called Crimson Clover as well, is also agriculturally important as a forage crop. It is larger overall than White Clover. The individual flowers have very long tubes, and it is reputed that the bumblebee is the only bee with a tongue long enough to reach the bottom of the tube to collect the nectar therein and pollinate the flower. In fact, honey bees are also successful at foraging and pollinating Red Clover. 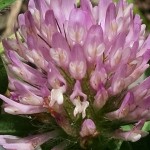 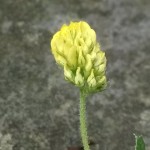 Hop Clover (Trifolium campestre) does well in poorer, more acidic soils. It has yellow flowers and a more prostrate habit and is also resistant to mowing.

The following two legumes were important components of soil conservation mixes in years past, but it has been since discovered that they outcompete many native plant species. They are now a conspicuous component of the local vegetation. 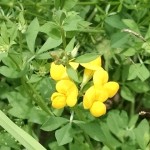 Birdsfoot Trefoil (Lotus corniculatus) has leaves similar to the Clovers, but the shape of the yellow flowers is more obviously pea-shaped. It does very well in drier poorer soils, hence it is often seen especially along hot dry roadsides. Keep an eye out for the seed pods as they develop. They usually have a long “horn” or bristle at the tip. 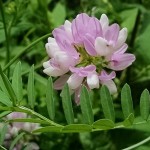 Crown Vetch (Securigera varia) has flowers similar in shape to Birdsfoot Trefoil, but they are in shades of purple to white. The leaves are also very different. The leaf is divided into many leaflets arranged in rows along the stem. Crown Vetch has a clambering habit, using surrounding plants as support. 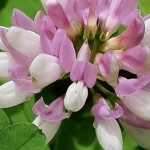