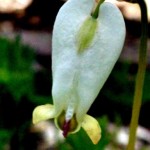 Dicentra canadensis. Also known as Squirrel Corn, this species is one of two native to the Catskills

Last week, I focused on the Bleeding Heart, a popular garden plant which used to be in the genus Dicentra.  Dicentra has two species native to the Catskills region.  One is Dicentra cucullaria, the Dutchman’s breeches and the other is D. canadensis, aka Squirrel Corn.

These two Catskills wildflowers are woodland spring ephemerals, (which means that they do their thing early on in the season, then fade out by midsummer after setting seed). Both species are obliged to be pollinated by bumblebee queens, and the time of their bloom is somehow synchronized with the emergence of bumblebee queens when the queens first emerge to forage for their first brood’s feeding. Why such a particular relationship with the queen bumblebee? 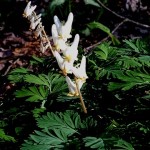 These Dicentra have only a bit of pollen, and can’t afford to dump it on the ground. Their tight relationship with the bee ensures that their bit of pollen makes it to another compatible Dicentra of the same species.  Only a queen bumblebee, not some slender little fly, is robust enough to pry open the flower to get at its pollen and at the same time pollinate the flower. The queen will use the pollen to raise her first worker bumble bees of the season.

Dutchman’s Breeches and Squirrel Corn rely on bumblebee queens for pollination, and they have evolved other interesting interactions with other insects as well.  These two species of Dicentra lure ants into spreading their seed. Dicentra seed is relatively heavy, it is not likely to travel far without some assistance. So Dicentra seeds have a little packet of fat (like a chocolate bar!) attached to each seed. The local forest ants love these little fat-rich ‘bars’, aggressively collect the seeds that bear them and store them underground in their nests. The ants will eat these elaiosomes (the botanist’s name for these tiny morsels) and the Dicentra seeds themselves will be dumped by the ants in their local trash pit, a dedicated chamber within their nest. This ant behavior effectively plants each Dicentra seed in a little compost. Eventually the Dicentra seed, unknowingly planted by the ant, will sprout and grow.