All TROUT LILY: Wild And Not So Wild Versions!

TROUT LILY: Wild And Not So Wild Versions! 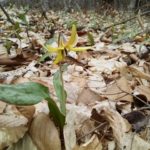 Blooming right now in the Catskills region is the Trout Lily. This little woodland wildflower is so-named because its leaves are mottled with maroon or brown like the skin of a trout and because its yellow flower is shaped like a lily flower (which makes sense, since it is in the Lily family). While the Garden Lily is often shoulder-high, the Trout Lily is relatively tiny compared to its huge garden cousin, flowering at about ankle height. Like many of our early spring wildflowers, the Trout Lily is pollinated by bumblebees and native solitary woodland bees. The seeds which will later develop are spread by a mechanism utilized by many other woodland wildflowers as well; their seeds are spread by ants (which I discuss in Dicentra part II, and show in my video, Catskills Ants in Action). The most common wild species native to the Catskills, is the species Erythronium americanum. There is also another species of Trout Lily in New York State, Erythronium albidum, the White Trout Lily, which is found in a band stretching east-west across the state from around Buffalo to the Capital District. 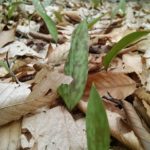 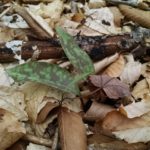 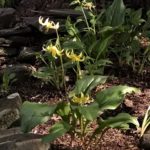 The non-native garden species of trout lily are also blooming now. Erythronium japonicum ‘Pagoda’ is a garden variety, selected from a species of Trout Lily native to Japan, Korea and eastern Russia. It is a much larger plant overall. When first emerging a few weeks ago, the leaf was tightly rolled and streaked with white. The leaves are now much larger, glossier, and paler green, compared to our native woodland Trout Lily. The flowers are very similar, but ‘Pagoda’ bears its flowers on much taller stalks, making the flowers much showier. 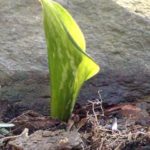 Erythronium before the ice ages was distributed throughout the Northern Hemisphere in a continuous band. During the ice ages, the polar ice caps increased in size and formed continental ice sheets several miles thick. At the leading edge of the ice sheet, glaciers formed and extended fingerlike/tongue like into the band of territory where the ancestor of all Trout Lilies was growing, the proto-Erythronium. The glaciers isolated populations of Erythronium and prevented interbreeding between the separated populations. Once the glaciers receded, the different populations remained separate and each population continued to evolve into several distinct species of Trout Lily. That is why there are now geographically distinct or disjunct groups of species all derived from a common ancestor.