All Sturdy Succulents in Catskills Gardens! 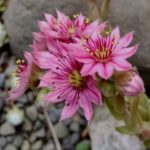 Succulent plants are desert plants, like cactus, right? Not here in the Catskills, where several are blooming right now. One plant family in particular, the Stonecrop family, known to botanists as the Crassulaceae, is probably best known for the popular house plants such as the Jade Plant and the Kalanchoe, but there are several members of the Stonecrop family also growing here in Catskills gardens. No Stonecrop family species are native to New York, though species are known from other parts of the U.S. Of the three groups of species or genera often seen growing here, I will discuss two genera in this post, the genus Sempervivum and the genus Hylotelephium. The third genus, Sedum, will be the subject of next week’s post. 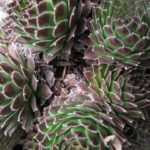 The genus Sempervivum, known commonly here as Hens-and-Chicks, has about forty species. Pictured here is a colorful variety of Sempervivum tectorum, a native of southern European mountains, but known and named for growing on roofs throughout Europe (tectorum in Latin means ‘of-roofs’). Also pictured is another species from Europe, Sempervivum arachnoideum, easily identified by the cobwebby white hairs growing in the center of the plant. This variety has attractive pink flowers as well. 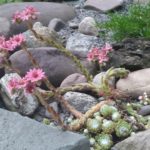 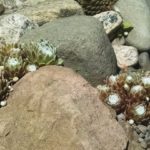 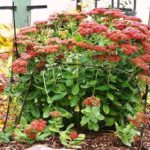 The second group of species are known to most gardeners as Sedums, but botanists now call this group of plants the genus Hylotelephium as distinct from the true Sedums. They are noticeably taller than the true Sedums. The famous variety ‘Autumn Joy’ is representative of this group. This common garden flower blooms late in August and is a larger plant, reaching at least 30” in height. Other varieties similar in habit to ‘Autumn Joy’ come in purple or white-variegated foliage, with white or pink flowers.

Our ‘wild’ species of Sedum, formerly known as Sedum telephium is actually a Hylotelephium. It is in fact a Eurasian native, but has become naturalized throughout the Catskills. 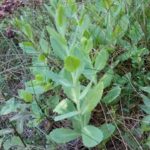 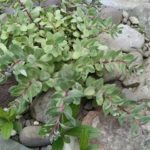 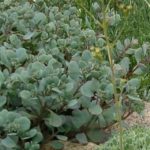 Also included in Hylotelephium are the sieboldii group of varieties, very garden worthy plants, because of the blue-green of their leaves, often with maroon edges.

The third group are the true Sedums, which I will discuss next week. They are a large enough group that they warrant their own post!