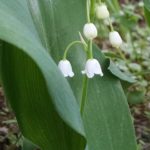 Blooming right now in Catskills gardens is the gloriously fragrant Lily-of-the-Valley, known to botanists as Convallaria. This plant is a native of Europe and Asia, but it has been planted in Catskills gardens since colonial times. In the 1800s it was potted, forced and sold in the florist trade. It prefers some shade and is one of the few shade-tolerant plants for our gardens that tolerates drier soil as well. In the Catskills, it naturalizes readily, surviving around long abandoned foundations. 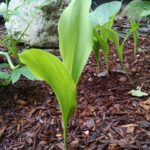 The plant itself has just two or three dark green leaves, and reaches only 4 inches or so in height. The flower stalk issues from the base of the plant and bears the white bowl-shaped fragrant flowers.

From a botanical treatise published in 1629 “… Camerarius setteth downe the manner of making an oyle of the flowers hereof, which he saith is very effectual to ease the paine of the Gout, and such like diseases, to be used outwardly, which is this; Having filled a glasse with the flowers and being well stopped, set it for a moneths space in an Ants hill, and after being drayned clear, set it by to use …” 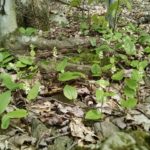 Also blooming right now in the Catskills is the Wild Lily-of-the-Valley, known botanically as Maianthemum canadense. This plant is a native wildflower of the Catskills. It grows in patches in the woods, and is really quite common. It is similar to the garden Lily-of-the-Valley in its petiteness, but a close examination of the flowers shows quite a different structure. In this plant, the flower opens and the sex parts stick out very conspicuously. The flower stalk issues from a leafed stem, unlike garden Lily-of-the-Valley whose flowers are borne on a basal, leafless stalk. 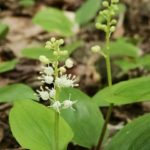 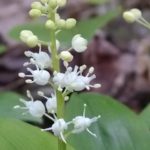 In my previous post on Solomons Seal, I mentioned False Solomons Seal and promised that I would discuss it in the next post. So here it goes! 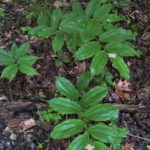 There are three other species of Maianthemum found in New York State. The one most commonly found in the woods here in the Catskills is the False Solomons Seal, Maianthemum racemosum. False Solomons Seal looks very similar to the Solomons Seals I discussed in the previous post, in the appearance of its leaves and its growing habit. But the flowers appear at the tip of the leafed stem, they do not hang down from the underside of the plant. Close examination of the structure of the flower reveals that it is indeed a Maianthemum and not a tubular Solomons Seal flower. 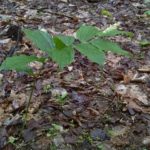 The other two species of Maianthemum found in NYS are more restricted in their range because of their more specialized soil preferences. They are not as common in the Catskills as False Solomons Seal and Wild Lily-of-the-Valley. One species prefers peaty boggy soils. The other species prefers more limestony conditions.