All Ligularia: Lovely in Catskills Gardens! 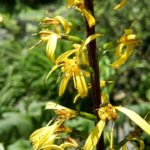 Blooming now in damp, shady gardens around the Catskills is a plant whose most common name is the undeservedly unattractive epithet Ragwort. This is not ragweed, the bane of those suffering from hay fevers. Other less common common names are Leopard Plant and Golden Groundsel.

This plant is known botanically and offered for sale as Ligularia. Ligularia is a wet woods loving wildflower in the Old World, where there are 120-140 species. Over half of the world’s species are found only in China. Besides ornamental use in our gardens, in Asia the leaves of one species are eaten as a vegetable; another Asian species is used medicinally.

Ligularia is not one of the best known, most common garden plants, but maybe here in the Catskills it should be. There are two major types of Ligularia growing in Catskills gardens. One is just now beginning to bloom. It is known botanically as Ligularia stenocephala. The variety most commonly grown here in the Catskills is the variety ‘Rocket’. It is an imposing plant, forming a clump of large, distinctively toothy dark green leaves, above which stand tall long-lasting spikes of yellow flowers reaching at least 4 feet in height. 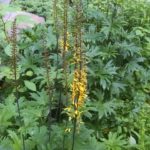 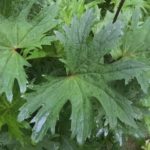 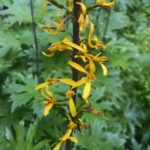 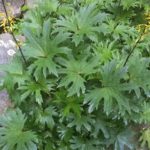 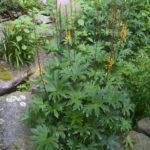 Flowering even later in the season, in August, is the other type of Ligularia most often grown in Catskills gardens, Ligularia dentata. The variety ‘Othello’ is most often available, and ‘Desdemona’ with more maroon or purple undertones to the leaves. Both varieties of L. dentata have large golden yellow daisy-like flowers in flat-topped clusters. The flowers are borne on sturdy stalks above the clumps of large leaves with a slightly toothed to almost smooth edge. 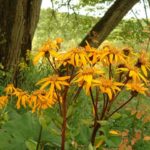 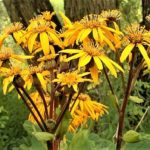 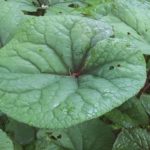 In both L. stenocephala and L. dentata, individual plants develop some girth with age. Both do self-sow and generate seedlings, but at a sedate well-mannered pace; this plant is not thuggish in the garden.