All Garden Friend or Foe III 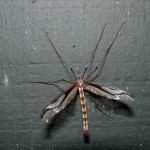 Temperatures have risen in Delaware County, and, now that the nights are warmer, many more insects are active. Two newcomers came to my back porch light this week.

The first newcomer is a large fly, Tipula caloptera, pictured above. This one was almost 2 inches long! Like a housefly, and like all true flies, it has only one developed pair of wings. As a wormlike larva it exists in mucky spots, where it eats decaying vegetation. When it emerges as an adult in the spring, it will not eat, only drink water. It must find its mate and reproduce soon because it will probably live as an adult for only about two weeks. Although large and maybe scary-looking, it is actually completely harmless. Other similar looking flies called tipulids actually live in the water in their immature stage and eat mosquito larvae! Because there are probably around 300 different species in New York, you will be seeing many similar but different tipulids in Delaware County throughout the season. 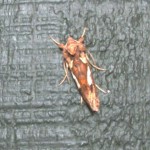 The second newcomer was a moth. Finally, a garden foe! Megalographa biloba is easy to identify, 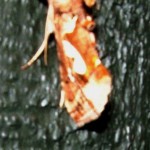 because it has a white patch on its front wing with a very distinct double-bump shape. As a caterpillar, it is a garden foe, feeding on lettuce, cabbage, alfalfa and other leafy crops. It’s very common and widespread from Canada to Argentina.