All Daylily vs. Lily Redux

This weekend my mother came to visit, so in order to spend more time with her, I am republishing a post from 2012, which I think many may find informative and appropriate for the season.

Summer is now in full gear here in Delaware County. Most trees and shrubs such as crabapples, lilacs, cherries and mock-oranges are done with flowering. Many roses have finished their first flush. A notable exception are the hydrangeas, which are now beginning to bloom.

Many perennials are in full flower now. Some of the most conspicuous of these are the lilies (genus Lilium) and daylilies (genus Hemerocallis). Beginning gardeners often confuse the two groups of plants, because they bloom at the same time and have very large showy flowers based on the six-pointed star shape, and because they are both often commonly called “lilies”. Here is the easiest way to determine if a plant flowering in your garden right now is a lily or a daylily. 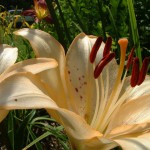 Lilies have single stalks with leaves arranged up and down the stem, the flowers sit on top of the leafy stem.

Daylilies have clumps of grass-like leaves at the base arranged in a fan shape, with mostly bare stems holding up the flowers.

There are around 100 species of lilies (Lilium) found all over the northern hemisphere, including North America where there are 22 species, but most of these are western species. Wild lilies are not all that common in Delaware County; the species Lilium canadensis is occasionally found along the shaded banks of streams and brooks.

Daylilies (Hemerocallis)are not native to North America at all, but one species has become very common along roadsides and around old foundations here in Delaware County. The Common Orange Daylily (Hemerocallis fulva) was introduced to New York State by Dutch gardeners in the 1600s, and has since become well established. It is even considered an invasive alien species in Wisconsin.