All A Catskills forest dweller – the Rosy Maple Moth – Pretty in Pink! 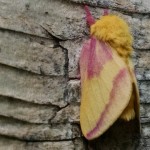 The local cast of characters changes throughout the season. The fly fisherman knows that different fly patterns are effective at different times of the season. Throughout our gardening season, different plants flower and fruit at their own particular time. So it is with many insects.  Many emerge as adults and complete their life cycle in a week. This was the week of the Rosy Maple Moth.

This week millions of Rosy Maple Moths, (Dryocampa rubicunda) emerged as adults. The majority of them were dead within three days of emergence. Over several late afternoons, the local populations of this moth emerged en masse. They had spent the winter in the ground in their pupal stage, changing from a caterpillar to a moth. Late into the night, throughout the Catskills forest, they mixed and mated. By the next morning, the fertilized females were resting, while the sperms deposited in them by the males made their way into the eggs inside the females. All through the day, the females stayed inactive. Then at sunset, they flew away to lay their eggs. They were done with egg laying by the time the next sun rose and became bird and ant food.

The eggs were laid on maple leaves in batches of 10 to 20 and when they hatch, the little caterpillars will all stick together, until they go off on their own and disperse, as they seek fresh maple foliage. They can be periodically and locally quite destructive as they munch through maple leaves. The Rosy Maple adult moth, however, is quite beautiful. Its wings are yellow and pink. Note that it is wearing a bright yellow plush fur jacket with hot pink sleeves!  The extra warmth provided by the jacket serves to insulate the moth’s flight muscles, as the evenings are still quite cool.