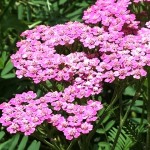 This week, Yarrow, a common wildflower that is also popular in the garden is blooming throughout the Catskills region.  Most of our woods wildflowers are native, part of the local vegetation before European settlement. Many of the wildflowers of Catskills fields and roadsides, however, were introduced to the region by European settlers; their seeds tagged along with the hay, fodder and other agricultural products introduced to the Catskills along with European farming practices.  Yarrow (Achillea millefolium) is a wildflower which has a natural Northern Hemisphere distribution.  The plant has a long history of medicinal use in the Old World, and it is part of the pharmacopia of traditional native American herbal lore, as well. 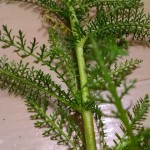 During the early part of the season, Yarrow grows as a low mat of fern-like leaves,  but later flowering stems develop, and at flowering the plant can be 30 or more inches in height. The whole plant releases an aroma that is considered quite unpleasant by some, while others enjoy its strong chamomile- or chrysanthemum-like odor. The flowers of wild plants are white with an occasional flush of pink, but in our gardens many varieties have been selected that have flowers in shades of pink. Close-up examination of the flowers reveals Yarrow’s membership in the Daisy family of plants; the central disk is composed of many miniature flowers packed together. 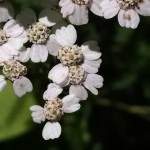 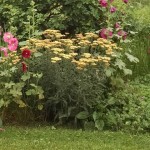 Besides Achillea millefolium, there are 150 or more species of Achillea found in the wild. Many of them have white flowers, but several species produce yellow flowers. These species are the ultimate source of the other colors of yarrow found in garden varieties. Yarrow can be a wonderful addition to a garden. It tolerates hot and dry conditions very well. Its flowers are very long-lasting when cut, and are often incorporated into dried flower arrangements. However, it can be such an aggressive grower that it will soon suffocate other less vigorous plants in the garden unless kept in check.