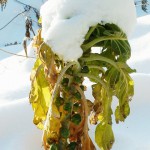 In last week’s post I discussed plant defenses against Delaware County winters such as wilting. Plant cells are little chemical factories and produce many complex substances, some of which are used here in Delaware County by plants for protection from winter conditions. In addition to plant anti-freeze, which I discussed in a previous post, plant cells also produce waxes which serve as a protective outer coating. By example, the Brussels Sprouts picture, as well as other cabbages make their own natural coating of paraffin wax which is chemically similar to the wax found in candles. Also, pea pods owe their waxy feel to naturally produced paraffin wax.

Wax serves to keep leaves from getting soaked and heavy and mashed down by the rain. The water beads up into drops and rolls off the leaf, at the same time carrying away dust and dirt particles and keeping the leaf clean. Plant wax also acts as a natural sunscreen, protecting the 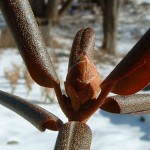 plant from UV radiation. It also creates an inhospitable surface for most fungus and bacteria.

The waxy coating on this azalea bud pictured below protects it from harsh winter conditions.