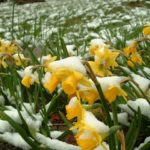 Here in the Catskills, many folks were anticipating the possibility of an early spring. The winter was pretty mild until this month, when the recent blizzard plunged us back into a real winter. Underneath the insulating blanket of snow, many plants have been exercising strategies to combat the cold. During the winter, many plant tissues dry out to the bare minimum; if their cells retained the water, the cells would explode when the water in the cells freezes and expands.

This year, spring appeared to come early and plants began to wake up out of dormancy, and to take up water into their cells. The sap started to rise, the tree buds to swell and the twigs to color up. Because spring is a tug of war between winter and summer, the cold weather inevitably returns, albeit briefly. Now, freezing could cause ice crystals to form in the plant cells and blow them up. 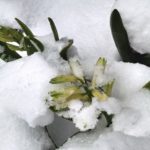 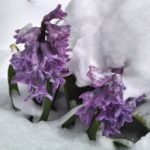 But many plants make proteins that work like antifreeze! These Antifreeze Proteins (AFPs) probably evolved in some Northern Hemisphere plants as they survived the ice ages. AFPs work by glomming on to the tiniest of ice crystals and they keep the ice crystals from growing any larger and rupturing the plant cell. 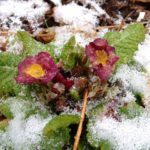 Other Catskills plants which are documented to have AFPs include Dicentras (bleeding-hearts and Dutchman’s breeches), Queen Anne’s Lace (AKA wild carrot, and domestic carrot plants, for that matter), daylilies and oaks, but it is probable that they exist in many other hardy plants such as this primrose. 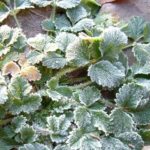 Another way in which plants respond to cold weather is to adjust the composition of their sap, i.e. their body fluids. Plant sap contains dissolved bio-chemicals like starches and sugars, as anyone boiling down maple syrup can confirm. Sugary sap freezes at a much lower temperature than starchy sap, so as the temperature drops, plants increase the relative concentration of sugar to starch in their sap and thereby decrease the temperature point at which their sap freezes and their cells are ruptured by ice crystals. This physiological response gives plants about 12 extra degrees of protection.

Send us your email address and we will add you to our subscriber’s list!