All Valiant Violas – Garden and Wildflowers of the Catskills!

Valiant Violas – Garden and Wildflowers of the Catskills!

Violets are common wildflowers blooming now throughout the Catskills. They are found carpeting the woodlands in dappled shade, and they can also be found growing in old pastures or even lawns. Violets are all known botanically as members of the genus (group of species) Viola. New York State actually has around 75 native species and subspecies of Viola with about 30 of them recorded in the Catskills region. Wild violets are an important component in the local ecology, as they are food plants for several dozen native insects including butterflies, moths, beetles and ants. In a ten minute walk in the woods, I found three different violets blooming now. 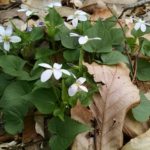 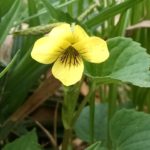 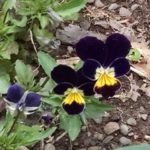 Leaf shape varies a bit from species to species, but the flower shape is distinctive – five petals with two petals oriented upwards, two oriented to the sides, and one larger petal oriented downwards. The flowering stalk is an important feature used in identifying violets. Some violets such as the wild yellow violet shown above have leaves on their flowering stalks, but many have flowers arising on leafless stalks such as the wild blue violet in the feature photo.

Violas also grow in our gardens. I mentioned above the wildlings, that sometimes become part of our lawns. Wild species can be used to good effect in the garden. Here is a native species I transplanted to my garden. 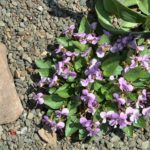 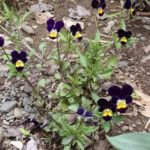 Commercially available right now as bedding plants for early spring planting are the colorful pansies and violas. The violas used as bedding or container plants are varieties selected from several wild species of violet. Their flowers are a bit larger than those of wild violets and the plants have a bushier shape.

Many produce seed copiously, and may survive the winter, but they are not usually as persistent as the following garden violet. Viola tricolor, pictured here, is locally known as ‘Johnny-Jump-Up’ because it easily self-sows. The typical Johnny-Jump-Up flower is pictured here. 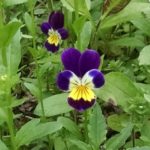