All Skunk Cabbage: Did you miss this Catskills wildflower?

Skunk Cabbage: Did you miss this Catskills wildflower? 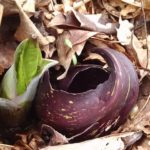 Skunk cabbage is a native northeastern wildflower, and a conspicuous plant at this time of year here in the Catskills. It is especially common in wooded bottomland which is seasonally flooded. Its bright green clusters of leaves are developed and obvious at a time when most other plants have barely gotten started, and the trees have not yet leafed out. The leaves are the source of the plant’s name, cabbage-like in appearance and foul-smelling when bruised. Skunk cabbage has super-strong roots that pull the core of the plant down into the muck. This keeps the plant from getting washed away during floods, and it keeps the plant from getting uprooted when black bears and other herbivores munch on their leaves. They are an attractive source of food for animals that don’t have much else going on in terms of salad during early spring. 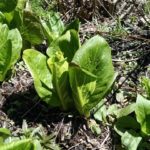 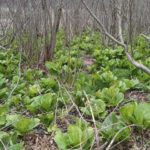 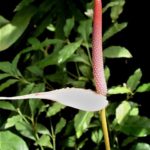 Most people don’t really know the flower of the skunk cabbage, but that is probably the most interesting part of this native plant. The flower emerges just before the leaves, often while the snow is still melting, so most people never see it. It doesn’t look like a typical Catskills wildflower at all. Skunk cabbage is a member of a plant family, the Aroid family, whose members are mostly tropical. Other Aroids include the popular houseplant Philodendron, and the garden calla lily. All Aroids share a common flower structure. The flower consists of a single modified leaf (called a spathe), cupping a solid stick or ball of densely packed florets (called a spadix), as shown by this tropical Anthurium or flamingo flower (another Aroid). The next photo shows the spathe of the Skunk cabbage flower, and for the last photo, I cut away the spathe to expose the Skunk Cabbage spadix. Side-by-side comparison shows that, although both flowers are overtly different in appearance, they share the same ground plan. 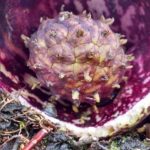 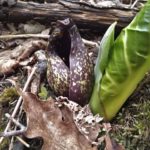 Spathe of the Skunk cabbage flower