All Season of the Willow!

Season of the Willow! 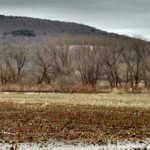 First is the black willow, our most common local willow, so called because it has blackish bark and brownish twigs.  It grows wild along rivers and streams and in swampy areas. Now, while the rivers and creeks are bloated with meltwater, the black willow is already beginning to flower, providing a very important early source of pollen for bees. Stands of black willow are easily spotted when driving through a valley with an extensive flat flood plain, as the trees form a line following the banks of the river.

All willows are water-lovers, and develop extensive root systems to suck it up. The garden varieties must be carefully sited when they are planted because their penetrating roots will work their way up drainage pipes and block them. But the extensive root system of the black willow is a benefit to us because it binds the riverbank and provides erosion control.  Willow wood has little commercial value today. In previous centuries, it was preferred in the manufacture of artificial limbs, because it is lightweight and not prone to splintering.

THE REST OF THE STORY

Two types are non-native and planted in our gardens. 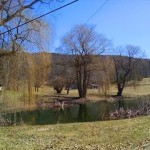 In American gardens, the golden weeping willow, a native of Asia can be quite imposing.  When mature, they can be quite massive, and in the early spring, the twigs have a bright yellow color that readily identifies them from great distances. They are known for the graceful weeping habit of their twigs, and are very happy when planted pond-side in full sun.

Pussy willow is the other willow found in our gardens, and it is blooming now. There are actually several types of pussy willow derived from a dozen or so species. The “pussy” part is actually the furry covers for the tender flower structures within the bud. The furriness insulates these against the freezing temperatures often experienced in the earliest spring when the willows bloom. The male flowers are called catkins, and come in several colors, including orange, black, lavender and yellow. Pussy willows are more shrubby in habit. In a natural setting, they will often develop into dense twiggy stands. 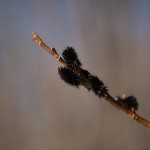 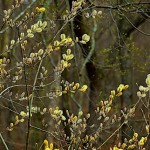 A pussy willow with yellow catkins, showing the dense twiggy habit of this shrub

The willow is a culturally significant tree.  Funerary objects in the shape of willow leaves have been found in Bronze Age burials. Willow bark has been part of traditional folk medicine for millennia and contains the precursor chemical from which aspirin was ultimately derived. In northern and eastern Europe, the pussy willow is used as a substitute for palm in places where the palm doesn’t grow for Palm Sunday and other Easter-associated celebrations.