All Is Your Honeysuckle a Good Guy or a Bad Guy?

Is Your Honeysuckle a Good Guy or a Bad Guy? 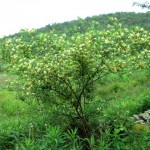 Honeysuckles are a large group of species and there are quite a few different kinds in Delaware County, as well as throughout Europe and Asia. The 180 species of honeysuckle form the genus Lonicera. Over half the species are from China; there are only 20 species native to North America. Most honeysuckles are vines, but a few are shrubs.

Several types of honeysuckle are blooming right now in Delaware County, both in the garden and in the wild.

Unfortunately, here in Delaware County, the types you are likely to find in the wild are the bad guys….

The bad guys are all shrubs. They include Lonicera tatarica (Tartarian Honeysuckle), which is a very common bushy shrub with pink flowers. It was introduced in colonial times to the northeast, and has since made its way even to California and Alaska.  L. morrowii (Morrow’s Honeysuckle) and L. maackii (Amur Honeysuckle, pictured above) are both shrubs with cream to yellow flowers. They are invasive and tend to choke out other types of plants – conducting plant genocide by either leafing out early and shading out spring wildflowers or by secreting toxic chemicals which inhibit the growth of neighboring plants and tree seedlings, inhibiting the regeneration of the forest itself. These 3 species, with their colorful red or black berries, were once widely planted to provide food for wildlife. They subsequently escaped and have spread by bird droppings throughout the countryside, so that they have become naturalized, a conspicuous part of our natural landscape. Cedar waxwings eat large quantities of honeysuckle berries, and it is suggested that a pigment in the berries might be responsible for a change in color of the waxwing’s spots in the last 40 years! The states of Connecticut and Massachusetts have gone so far as to prohibit the sale of the Amur and Morrow’s Honeysuckle. 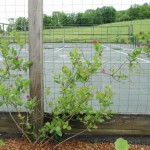 There are honeysuckles which are good guys, however. Most popular, especially with hummingbirds, is probably Lonicera ‘Dropmore Scarlet’, but ‘Mandarin’ in orange, and ‘Goldflame’ two-toned in 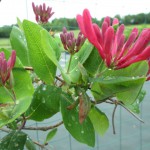 orange-red and pink are also sometimes found in our local nurseries; all of these are non-invasive and can make a useful and attractive contribution to our gardens. They all grow as vines and do very well in Delaware County. Here are two pictures of ‘Dropmore Scarlet’. One shows its growth habit, and the other shows the flowers in bud.