All How Late Are We, Really? (and an overview of Crocus as well)

How Late Are We, Really? (and an overview of Crocus as well)

If we are referring to the time when our first garden flowers bloom, for most of us that means crocus. So are the crocus really late this spring? 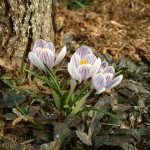 A variety of Dutch Crocus with striped petals

Yes, they are pretty darn late, by at least 3 weeks! Longtime observers of our local weather patterns know that this winter was unusual. I’ve been taking photos of my first snow crocus here in Delaware County for almost 2 decades. With the exception of one or two years, they have bloomed like clockwork in my garden by the middle of March. This year March has come and gone, and they are still covered with snow.

There are generally two sorts of spring-blooming crocus found in Catskills gardens. The best known and most common is the giant Dutch crocus, whose varieties were all bred from the species Crocus vernus (purple to white) and C. flavus (yellow).

The other sort of crocus commercially available is called species crocus or snow crocus. Crocus have about 90 Old World species, whose ranges are centered around the Mediterranean and Black Seas, but some species are found in Central Asia as well, with the easternmost species found in the western deserts of China. 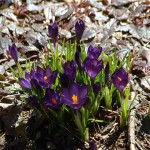 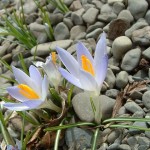 Several of these species of crocus have become commercially available over the last 2 decades. A few are rodent-resistant.

Species Crocus tend tend to have a more delicate appearance 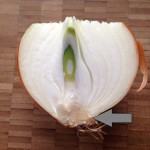 This onion in cross-section has a structure typical of bulbs. The arrow points to the woody basal disk.

Crocus have bulb-like storage structures called corms. The base of the plant stem itself is swollen to serve as an energy storing structure. A bulb, on the other hand, has the leaf bases thickened up. Think of an onion cut in half. That woody disk at the base where the wispy dried roots are attached is the plant base itself. The part we chop up and eat is the modified leaf bases. The corm of the crocus is equivalent to the woody basal disk of the onion.

Crocus have a life cycle characterized by an annual dormant period.  While most of the crocus common in our gardens bloom in the spring, there are just as many species in the wild that bloom in the fall.