All Do You Know Your Rhodie? Azalea vs. Rhododendron (Redux)

Do You Know Your Rhodie? Azalea vs. Rhododendron (Redux)

Spring has been very busy for me this year, so this week I am re-posting a popular blog from 2013, with a few new photos. 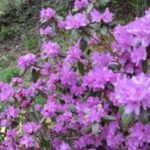 All azaleas are rhododendrons, but not all rhododendrons are azaleas. And not all small leaved rhododendron are azaleas either. Rhododendron is a huge genus (group of species) that has over a thousand species in the wild, and there are also thousands of varieties developed by horticulturalists. Many of these species are tropical and not suited for our gardens here in the Catskills, like the Vireya species group, which is found throughout the Malay Archipelago and even reaches into northern Australia.

Within the genus Rhododendron are three rhododendron species subgroups commonly known as Azaleas. The Tsusuji Azalea subgroup is found in Asia and has cultural significance in Japan. The Korean Poukanense variety is a representative of this group that has become commercially available in our area recently, but is not yet common in our gardens. The third azalea subgroup consists of species native to eastern North America and these are the azaleas we find in our gardens here. 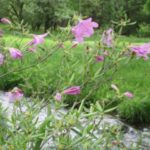 Here in the Catskills, there are three major types of rhododendrons commonly found in our gardens:
1) Native Azaleas – mentioned above, these lose their smaller leaves during the winter and have single flowers at the end of branches. This photo shows a typical azalea flowering habit.

They have leaves with scattered brown bristles underneath. Native azaleas flowers come in yellow and orange as well as white, pink and purple. The most well known azalea in our gardens is the Pinkster. 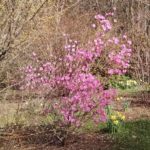 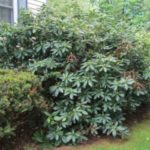 2) large-leafed rhododendrons –these keep their leaves through the winter and have large trusses of flowers conspicuously clustered at the end of branches. Some have brown fuzz on the leaf undersides. These rhododendrons often have relatively huge leaves and can be very large overall. 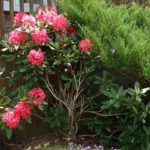 3) small-leafed rhododendrons – these also keep their leaves through the winter and have small clusters of flowers scattered all over the shrub so that it looks covered with blooms. All have brown fuzz on their leaf undersides. Rhododendron ‘PJM’ is a common commercially available variety in this group, which is widely planted in our area (top photo). 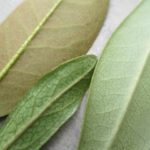