All Crazy Daisies of the Catskills!

Crazy Daisies of the Catskills! 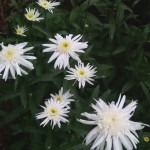 Blooming throughout the Catskills right now is the Oxeye Daisy, a wildflower of fields, roadsides and other open areas. Known to botanists as Leucanthemum vulgare, it is actually a native of Europe, but has become naturalized here so that it is now a common and conspicuous component of the local vegetation. The Oxeye Daisy prefers sun but survives in part-shade. It generally grows to about 30 inches tall, but often becomes so top-heavy with flowers, that it flops over and sprawls. The leaves are dark green leaves with scalloped edges. 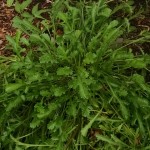 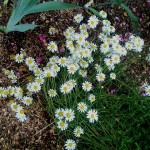 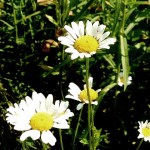 The Oxeye Daisy has the classic daisy flower shape with many petals arranged like a wheel around a central head of many yellow flowers compressed into a dense disk.  What we call a daisy flower is, strictly botanically speaking, a fusing together of many tiny individual flowers. 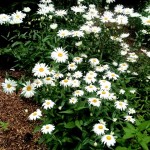 The popular garden daisy, the Shasta Daisy was created in the US in the 1890s by hybridizing the Oxeye Daisy with 2 other European species.  Genes from a closely related Japanese plant, Nipponanthemum nipponicum, were also introduced. The Shasta Daisy was the result, named after the snow-covered mountain because of its gleaming white petals. Its botanical name is Leucanthemum X superbum; the X indicates that is a hybrid not a plant occurring normally in nature. Compared to the Oxeye Daisy, it is a more robust plant with bigger, showier flowers on sturdier stems, and so retains a neater appearance in the garden without sprawling. The leaves are thicker and shinier than those of the Oxeye Daisy, as well. 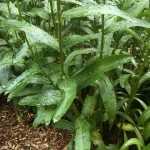 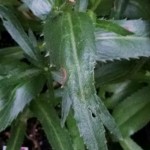 There are many popular varieties of Shasta Daisy commercially available. Most are characterized by having super-sized flowers. The petals may be long, thin and spidery; or they may be broad and blunt-tipped with more of a wagon-wheel look. The members of the Crazy Daisy group of varieties of Shasta Daisy have multiple rings of white petals with the yellow central disk reduced. Recently, varieties with petals in soft yellow shades have been introduced. There are even several dwarf varieties suitable for the rock garden. 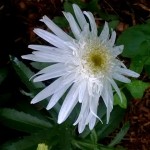 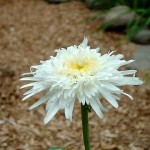 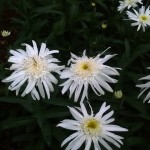