All Coltsfoot: A Catskills Wildflower!

Coltsfoot is a very common sight here in the Catskills, flowering at this time of year. It prefers to grow along the wooded sides of back roads, as it does well in the damper, gravelly ground found there. 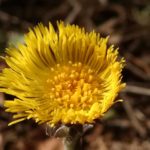 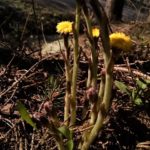 It has bright yellow dandelion-like flowers growing on grayish green stalks that look a little like asparagus spears. They don’t have any leaves yet, but within in a few weeks the leaves will have emerged, broad and rounded. The leaf shape inspired the common name ‘Coltsfoot’. The flower looks dandelion-like because it, like the Dandelion, are both members of the Daisy family. 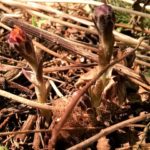 The scientific name is Tussilago which means ‘cough-agent’ or ‘cough-actor’ in Latin. It is a common plant in Europe and Asia, where it is used in traditional herbal medicine to alleviate coughs. Several scientific studies have identified potentially beneficial biochemicals in Coltsfoot, but other studies show that other biochemicals derived from Coltsfoot may have less healthful effects. Some Japanese studies have found carcinogenic effects in Coltsfoot biochemicals as well. So I am not here recommending that you use my blog for herbal medicine remedies!

Coltsfoot is not a native wildflower here in the Catskills. The European settlers introduced it either purposefully as a component of their herb gardens, or inadvertently as a stowaway. 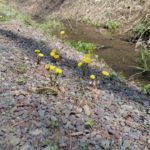 In its native Europe, the plant is a very successful colonizer of open and disturbed places. It does well in gravelly soils, and its seeds, like dandelion seeds, are wind-born and copiously produced by the plants. In the Netherlands, dykes and levees are built to reclaim land from the shallow sea. These reclaimed lands are called polders. Coltsfoot is considered one of the worst invasive plants of polders. Phragmites grass, the same grass growing in North American estuaries like the Meadowlands of New Jersey, is often preemptively planted in the Netherlands to cover the new land of the polder before Coltsfoot can become established.