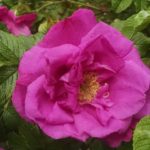 For the last couple of weeks, Rosa multiflora has been in full bloom here in the Catskills. It has powerfully scented flowers arranged in clusters, with a single row of five white petals, notched at the tip. It is very common, most often seen growing as large clumps in full sun, but it can also be found working its way up and through neighboring trees reaching for the sun. Older plants can form very massive clumps, 6 to 8 feet tall, or even taller with support. When in bloom, they are often quite conspicuous, even from a distance, dotting old pastures or growing along the roadside. However, this rose, though very much naturalized, is not a native of New York State or even of North America. It was introduced from Japan in 1886. This rose easily spreads by seed, and is robust enough to overwhelm a large shrub like a rhododendron within a few years. The plant’s stems have truly vicious skin-ripping thorns, as anyone can attest who has tried to remove it from an overwhelmed shrub in one’s garden. It has been declared a noxious weed in at least 12 states. 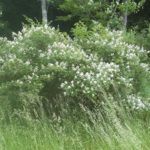 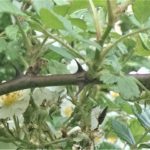 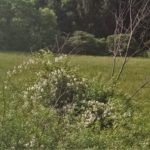 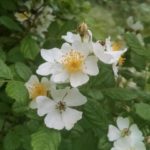 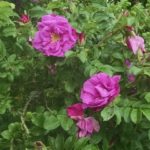 Another rose often seen in the Catskills is used in gardens here because it is one of the hardiest roses available. It comes from the seacoasts of northern China, Japan, Korea and Siberia. This is the Rugosa Rose, Rosa rugosa, most often seen in dark pink but available in white and golden yellow also. It is planted for its larger, more petaled flowers. It is also quite spiny and bristly as well. It tends to form massive clumps, but more slowly and it does not spread as readily by seed here in the Catskills, as does Rosa multiflora. However, it can be quite invasive in places with sandy soils, and it is now a common plant of coastal habitats all along the eastern US seaboard. 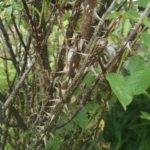 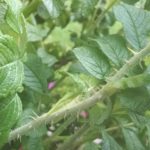 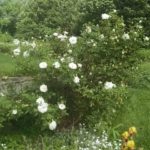 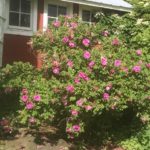 There are altogether about 15 species of rose growing wild in New York State. Of the six species of rose truly native to New York State, at least three are locally common here in the Catskills. They all have bright pink flowers with a single row of petals, and are generally more petite than R. multiflora and R. rugosa, usually reaching 3 feet tall. This is one of the native species, Rosa carolina, identified by its straight spines which are usually curved back in other roses. 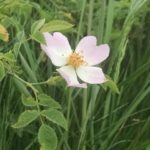 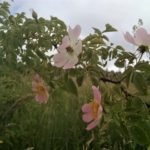 Many of the pink roses growing wild are hard to identify, so I am tentatively identifying the following rose as another native, Rosa blanda, because of its nearly thornless stems. 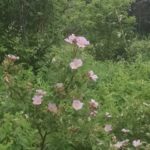 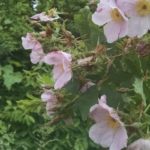 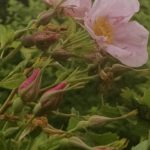