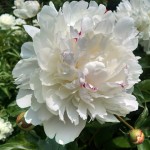 Catskills peonies are blooming now! They may be one of the all-time favorite flowers now blooming in our gardens. 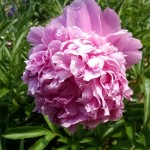 A pink version of the ‘bomb’ – shaped flower

The peony is well-known for being very long-lived, enduring for decades and even centuries. The famous peonies at Williamsburg were reputed to be colonial in age, but the oldest plants were actually only planted during the 1860s. That’s still 150 years, which qualifies them as long-lived as far as I am concerned.

The old fashioned double type of peony is familiar to most folks. It has large, often intensely scented flowers, which are crimson to pink to white. A very popular old-fashioned type with intense fragrance is ‘Festiva Maxima’. Another old-fashioned peony flower shape found is the ‘bomb’ or globe-shaped flower, here pictured in pink. 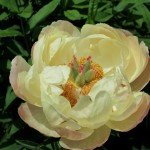 There are at least 25 species of peony in the wild. There are three distinct groups of species:  the tree peony or Moutan group of species are found in Asia and are genetically the most primitive group.

The herbaceous group of peony species from Mediterranean Europe and Asia are the ancestors of the old heirloom peonies found in our gardens.  While the preponderance of the herbaceous peonies are Eurasian in distribution, there are two outlying species in western North America which form a distinct third group. One is found from the Rockies west to the Pacific Coast in scrubby habitat like sagebrush flats and Ponderosa Pine forest. The other North American species is found in the southern Sierra Nevada of California. It is considered by some botanists to not be all that distinct a species, but rather a distinct local population. 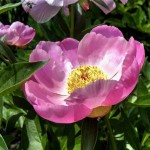 The original wild flower-shape of the herbaceous peony is single-petaled. This character is retained by the single anemone flowered type found in gardens (see “A Taste of Anemone“), distinctive for its conspicuous ring of stamens. 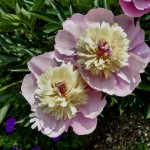 A Japanese type of peony

The Japanese flowered type of garden peony looks like a single flower type, but has an interior group of modified petals.

Many of the Eurasian species occur as isolated pockets in mountainous areas.  For instance one species is found only in southeastern Tibet, another species is found in the mountains of Greece; another is found in the Caucasus; another in the mountains of Yunnan in China, and so on. Genetic studies show that many of these species are naturally occurring hybrids of other species. Before the Ice Ages they all mixed together and hybridized, but during the Ice Ages, the hybrids became isolated from the populations of their parents’ species both in physical location and  genetically as well and became species in their own right. It was also during the Ice Ages that the North American species became isolated from the Asian species.