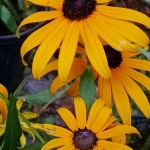 Black-eyed Susans are blooming throughout the Catskills right now.

Many of the wildflowers I have posted on recently are originally from Europe but have naturalized to become a significant component of the local Catskills vegetation. Not Black-Eyed Susans! Black-Eyed Susans are North American natives with about 24 good species. Black-Eyed Susans are in the Daisy family, and their flowers have the typical daisy shape.  The golden yellow color of their flowers signals the arrival of late summer. These flowers as a group are known to botanists as the genus Rudbeckia. Rudbeckias have even been introduced to European gardens where they have escaped and gone wild!

The three most commonly found types of Rudbeckia in the Catskills are: 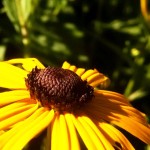 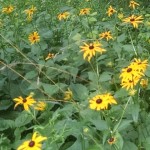 Rudbeckia fulgida is the type of Black-Eyed Susan found most commonly throughout the Catskills. It grows in old fields and along roadsides. It is also a common plant in Catskills gardens, and flowers well even in part shade. Rudbeckia fulgida has leaves which are rounded at the base but sharply pointed at the tips. The plants when in flower are around 24 –30 inches tall. 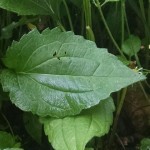 Another Black-Eyed Susan found usually in gardens in the Catskills is Rudbeckia hirta, also known as the Gloriosa Daisy. It is a species native to the southern and the midwestern U.S. states. It is not reliably perennial here in the Catskills but readily self-sows. Many of the showiest Black-Eyed Susans are varieties of the Gloriosa Daisy. The flowers are much larger, and some varieties sport dark reddish markings. The leaves are more densely hairy and more oval-shaped than our local wildflower. It prefers full sun.

Rudbeckia laciniata ‘Hortensia’ doesn’t look like a Black-Eyed Susan at all! When I first found it growing around old farmhouses, the old-timers called it Tall Coreopsis, and for decades, it was known commercially as Coreopsis ‘Golden Glow’.  It is an heirloom variety grown in local gardens since the 1880’s. It often persists after the rest of the garden has disappeared around old farmhouses, probably because it is very deer-resistant. It actually prefers part shade and grows very tall indeed, around 5 feet tall. 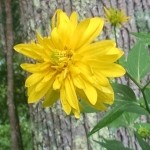 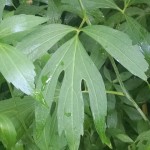 The leaves are very distinctively shaped as well, with three lobed leaflets.