All Ancient Survivor – The Magnolia 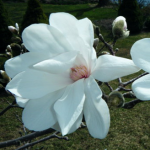 The recent freezes have done damage to some plants, but many survive with no more than cosmetic damage! Why? How?

During the winter, many plant tissues dry out to the bare minimum; if their cells retained the water, the cells would explode when the water in the cells freezes and expands.

Then spring comes and the plants begins to take up water into their cells. A late frost could cause ice crystals to form in the cells and blow them up. But many plants make proteins that work like antifreeze! These Antifreeze Proteins (AFPs) probably evolved in some Northern Hemisphere plants because of the ice ages that occurred about a million years ago. AFPs work by glomming on to the tiniest of ice crystals and they keep the ice crystals from growing any larger and rupturing the plant cell.

Delaware County plants which are documented to have AFPs include Dicentras (bleeding-hearts, Dutchman’s breeches), Queen Anne’s Lace (and domestic carrot plants, for that matter), daylilies and oaks, but it is probable that they exist in many other hardy plants such as this primrose.