All A Taste of Anemone

A Taste of Anemone 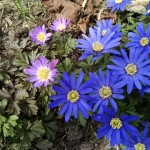 Anemone is a genus (a closely related group of around 150 species) with representatives in our gardens and with native species here in the Catskill Mountains as well. The genus Anemone as a whole has a very interesting history to explain all the different types of anemones in different places. The original or proto-Anemone originated in the late Cretaceous period when the southern continents were united in the supercontinent Gondwanaland. As the modern continents evolved so did all the species of Anemone. One species, Anemone multifida, is found in South America from Argentina to Peru, and in North America, but it is completely absent from Central and northern South America. Since Anemone seeds are large and heavy, they are incapable of traveling very far. There are several scenarios proposed by evolutionary biologists to explain the distribution of this and other anemones, and perhaps I will focus on these in a future post. 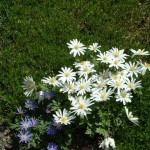 One popular species blooming now in Catskills gardens is Anemone blanda or Grecian Windflower.  This species is native to the mountains of the Balkans.The blue form is most common, but white and pink are offered as well.The white form is quite robust, while the pink form is not so sturdy. Anemone blanda has a flower that superficially resembles a daisy with its many petals. 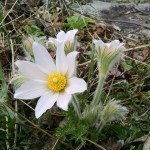 The Pasque flower is one of the showier anemones

Another garden species blooming now is the Pasque flower, which was formerly known as Pulsatilla. Now because of recent DNA analysis, it is considered to be an anemone. It is very showy as can be seen in the photo.  This is one of several species of Pasque flower. The white form pictured here is much less common; more often seen is the form with flowers deep red in color. 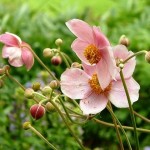 Japanese anemone blooms in the late summer, while most anemones bloom in the spring!

Another popular garden species of Anemone is Anemone hupehensis, the Japanese Anemone. It is actually a native of China but has been cultivated in Japan for centuries. It too has a typical anemone type of flower, but it blooms not in the spring but in the late summer!