All A Geranium is not always a Geranium! Catskills Garden Geraniums

A Geranium is not always a Geranium! Catskills Garden Geraniums 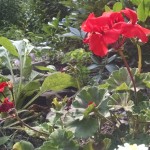 One of the most popular annual flowers for window boxes and planters is the Pot Geranium, known to most folks just as geranium. It bears clusters of flowers on strong stems and is very tolerant of sunny, hot, dry conditions. 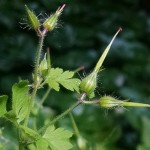 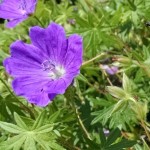 The flower of a garden Geranium

In contrast, the other less well known geraniums, the garden geraniums, prefer more shade and moisture. And their flowers look really different. They are also often referred to as the Cranesbills because of the shape of their developing seed capsules. So are geraniums schizophrenic or what? 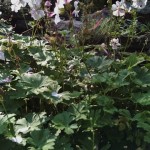 Geranium biokovo, a species from the Balkans

Well the garden geranium was known to European botanists first, because it is a common wildflower there with many species found especially around the Mediterranean, and subsequently adopted into European gardens. And this plant was first called geranium. All these garden geraniums have more or less aromatic leaves. While some are pleasantly aromatic, most are somewhat foul-smelling. Their stinkiness discourages possible herbivorous animals, and potential insect herbivores as well. The active ingredient geraniol, derived from geraniums, is used in many commercially available insect repellants. 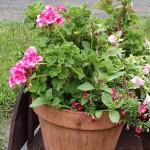 A Pot Geranium, actually a pelargonium

Later with the beginning of colonization, European botanists became familiar with the plants of South Africa. They came across a group of flowering plants with equally stinky leaves and at first called them Geraniums also. When introduced to gardeners as frost-tender annuals, they were called Pot Geraniums. And they are still called geraniums by most folks to this day. The Pot Geranium is one of a group of around 200 species found only in southern Africa. This group is botanically known as the genus Pelargonium. 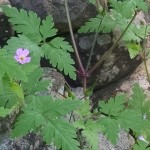 The most common real geranium in the Catskills is probably unnoticed by most people. It is a very common garden geranium introduced from Europe now impersonating a Catskills wildflower, and it is often considered a weed when it shows up in garden beds. Herb Robert, known botanically as Geranium robertianum, is pictured. In the Catskills region, you could probably walk over to almost any shady area and find some blooming right now.